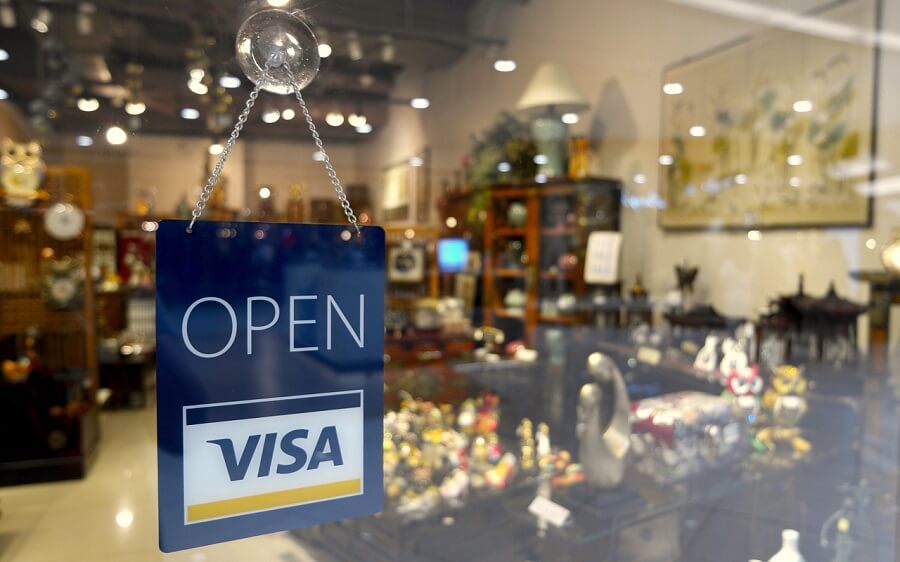 If you visit the link above and go to section 3.5.2 Visa, you will find 414720 is a Chase card. Then, the page even tells you that this a Chase Sapphire Holiday Inn Priority Club Rewards card. I checked my Chase Sapphire and 414720 are the first six digits.

The remaining ten digits are the combination of numbers unique to your credit card account. The reason for the emphasis on “account” is that you can keep the same card number on multiple cards.

For example, if your card expires, you may decide to keep the same card number. But if your credit card is lost or stolen, you should of course cancel the card and get a new card number.

Visa’s history began in 1958 with the launch of Bank of America’s BankAmericard in San Francisco, CA. An unsolicited “drop” of 60,000 BankAmericards sparked the initial success of the program. In 1970, a law was passed to prevent such drops.

The card was later re-branded, along with a consortium of other cards, under the name of Visa. At that time, Visa USA and Visa International were also established.

If you have traveled for an extended period of time, you may have needed a visa, such as a work visa. This type of visa is the inspiration for the Visa credit card; it refers to universal acceptance around the world.

From 2010 until 2015, Visa was the world’s largest credit card network. In 2015, they were surpassed by the China’s UnionPay. Visa is still the largest in the US, maintaining a significant lead over MasterCard. Recent estimates put the number of Visa cards at 335 million to MasterCard’s 200 million.

Visa card works by having an issuer with which Visa communicates. When you swipe, insert, or tap your card, transaction information is sent to the card issuer. The issuer then sends that data to Visa, which in turn sends back an approval (or denial). Finally, that information is sent back to the merchant.

Visa does the majority of the work on the transaction side. So what is the benefit for the card issuer? Of course, they are the ones that charge interest on your card balances. If you carry over a balance month-to-month, your card issuer is the one who cashes in on those interest charges.

I find using a Visa to be a convenient way to pay (though your opinion may vary). When paying with a Visa, you don’t have to deal with loose change, you get added security, and in many cases, you get rewards just for using the card. The caveat to all that is that you must pay the card off to avoid interest charges.

Why Visa Cards Are Declined

As you can see, Visa is doing the most important task: determining whether to approve or deny the transaction. Most often, transactions are denied because the cardholder is over their limit. However, there could also be a temporary hold on the card, or it could be closed entirely.

In any one of these circumstances, it would be to approve the transaction. Thus, Visa is taking on the most important responsibility. If there were an error here, there would no doubt be legal action.

There are even some retailers that do not accept Visa but may accept other cards such as MasterCard. However, those retailers are in the minority. Generally, retailers that accept credit/debit cards will accept Visa. American Express is usually less accepted globally because it has higher fees.

What is a Visa Card Security Code?

A Visa card security code, also known as a Visa card CVV, is the three-digit code on the back of your card. This code creates an additional layer of security for your card. Even if someone is able to skim your card number, they will usually still need the CVV.

Generally, CVV codes are not stored in a database. This means that if someone steals your Visa card number, it will still be difficult for them to make use of it without the physical card.

Credit cards tend to be more secure than debit cards. In addition to the CVV code, credit cards act as a middle man. Technically, they as an “IOU” for purchases you make with them. But if you suspect a fraudulent purchase with your card, you can typically call and have it reversed. The card company will then send you a new card and cancel the existing one.

However, if someone gains access to your bank account, it will be a lot more difficult. Once cash leaves your account, it will probably be a much tougher sell. Thus, if you prefer not to use a credit card, it’s actually safer to just use cash.

There are several different types of Visa cards. Each level has different benefits and use a tiered system. In other words, as you go up the scale, each level includes the benefits of the tier below it plus additional benefits.

One thing to note about this is that it’s likely that the higher levels of Visa usually come with an annual fee. In other words, those benefits won’t be free. Still, the cards usually have their own benefits outside of the Visa benefits.

Visa Traditional is the most basic level of Visa. It includes benefits such as requesting a replacement for lost/stolen cards and accidental damage protection for rental cars. Also included are protection against fraud, plus roadside assistance.

These are actually fairly decent benefits given that this is the most basic level. Oftentimes, people aren’t even aware that their card offers rental car insurance. It’s a nice thing to have, especially if you travel often.

Also included is insurance for emergency medical transportation. Although we don’t like to think about the idea of an emergency, nothing makes an emergency worse than a whopping bill after the fact. Having that insurance can really give you peace of mind, especially when travel can be stressful as it is.

Visa Infinite, as its name signifies, is the most premium level of the three. That means it includes the benefits of both of the previous tiers, plus even more bells and whistles. It includes protection for both returns and purchases.

You’ll be covered for cancellations, travel-related accidents, lost luggage, and trip delays. Various levels of costs are covered in each scenario, but it suffices to say the coverage is comprehensive.

The Visa card number is a 16-digit code printed on either the front or the back of your credit card. The first digit (4) indicates that the card is a Visa. Then, the first six digits of the card indicate the issuing bank and the type of card.

Visa cards come with numerous benefits: added security, perks, and cash back/points. These are just a few of the reasons for using a Visa. And now that you know how to find your Visa card number, you are ready to start taking advantage of all these benefits!

How to Cook for One (and Still Save a Ton!)