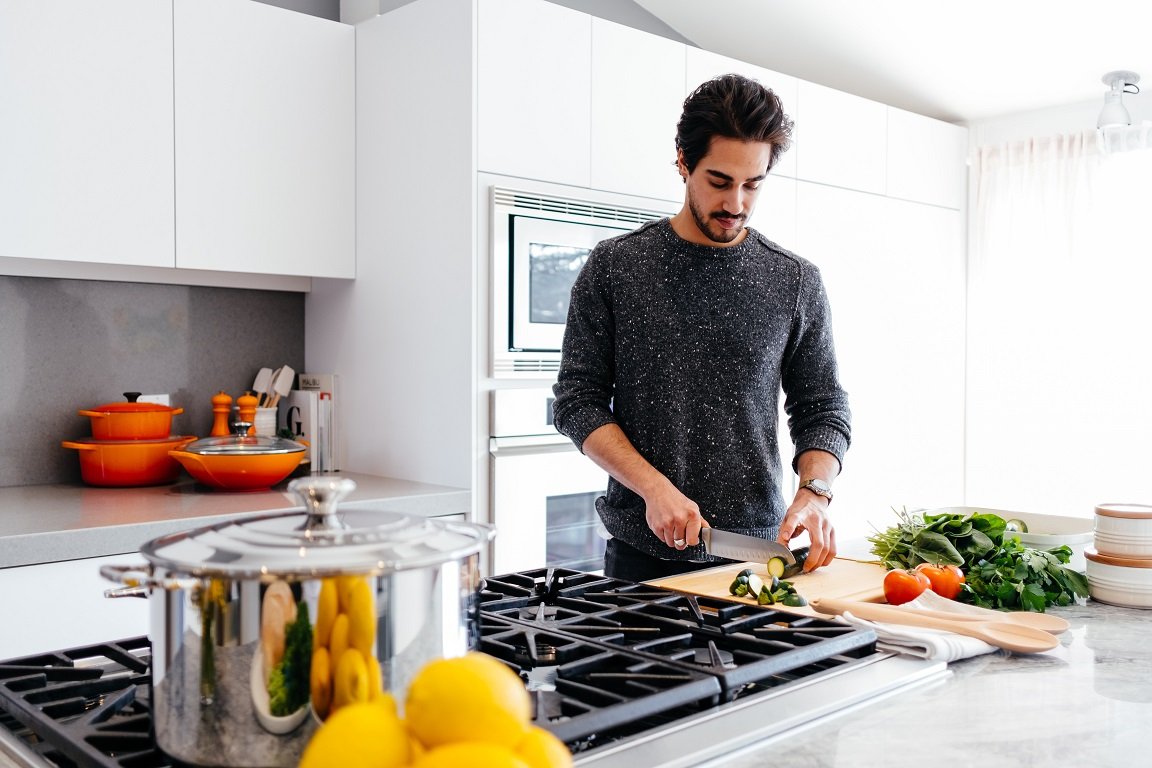 This is one of those posts I probably should have written a long time ago. Why? Because not only is it a learning experience for me, but knowing how to cook for one is something many people struggle with.

And yet, it is an invaluable skill.

The savings may not be quite as large for a single person compared to a family of four or five, but food is still a significant expense for most of us. As such, cutting down on this expense can be hugely advantageous in the long run.

However, I know that, for me, there are some logistical challenges of cooking for one that I once thought were too difficult to overcome. But that isn’t true. So, first, let’s address those challenges – and what you can do about them.

Recipes For a Large Number of Servings

I know that, for me, this is usually my first challenge when cooking for one. I really don’t want to have enough servings to last me a whole week.

Rice and beans anyone? There’s a reason certain ingredients are staples. In the case of some ingredients, the reasons are many.

And that includes rice and beans, of course. Not only are they cheap, filling, and last seemingly forever – they can also be used in more ways than one can count.

Of course, no food item is without its downsides, and nutritionally rice ‘n’ beans aren’t that great. You’re definitely going to need some vegetables and/or greens added to the mix.

In any case, there are certain things you can use in so many different ways. Think chicken, eggs, mixed vegetables, and so on. If you have a recipe that calls for duck feather extract or something crazy, is that something you really need? Or will ever use again?

By the way, is duck feather extract a real thing? I hope not. But you get the idea.

If you are using primarily ingredients that are used in many different ways, it’ll be much easier to whip something up without having to buy a ton of brand-new packages of stuff.

This kind of piggybacks off of #1, but it’s also an important point. If everything you’re making calls for 500 different ingredients, it’s unlikely you will already have all of them at your disposal.

On the other hand, if most of the things you make call for no more than 15 ingredients, it’s more likely you’ll be able to have everything on hand and just use as needed.

Again, the point here is to not be constantly buying large quantities of ingredients that it’ll take you God-knows-how-long to use.

And if your pantry looks like it could use some serious Marie Kondo action, it’s debatable whether cooking for one will actually be cheaper.

I mean, despite what some people say, I honestly don’t think it’s a given that cooking for one is cheaper than dining at (very cheap) restaurants. It does require a certain approach, which is why making simple dishes really helps.

Yes, I know. You were hoping this wouldn’t be ANOTHER blog post that talks about how super important the freezer is. But if you are cooking for one, there isn’t really a way around it.

As I mentioned in my frugal living tips post, there are certain things it just makes sense to freeze, like soups and vegetables.

Rather than thinking of this as a hassle, think about the good side to it. Like what, you ask? Well, you have all this goodness in your freezer that will take minimal effort to prepare. And you don’t even have to leave home!

4. Make Yourself a “Garbage” Salad

And that happens to work quite nicely if you often cook for one. You might be left with a lot of odds and ends for which you need to find a use.

What are some dishes that use many common ingredients? And, hopefully, versatile ones?

Come up with four or five of these dishes. These will be your “core” – meaning they have several ingredients that can also be used in many other dishes.

Imagine it like one of those web charts where you have a few starting ideas, and each one of them has branches that come out of it.

If you have no idea what I’m talking about, it would be something like this chart.

Yep, sometimes it just takes some good old fashioned creativity. There’s more than one way to skin a cat – or whatever. Okay, yes, I know that’s not what the means.

Nevertheless, it’s totally true that you have to be creative sometimes. For example, think about all the things you can do with potatoes. Heck, even shrimp has lots of uses!

Sure, this whole movie (Forrest Gump, just to be sure) is meant to be somewhat of a joke. But that doesn’t mean there aren’t nuggets of truth in it!

When you really start thinking about it, there are so many ways to prepare different foods. When all else fails, you can always just experiment. Remember, you’re cooking for one here, so no one will be breathing down your neck if your experiments don’t go well. 😉

7. Bulk Up with the Bulk Bins

I admit that I haven’t always taken advantage of these, in part because the stores where I shop often don’t have them. But you really should use them if you can.

After all, one of the problems I have most often when cooking for one (as mentioned above) is an over-abundance of ingredients. Everything seems to be packaged and sold as though you are feeding the entire 42nd Infantry Division.

When you take advantage of bulk bins, though, there is no set quantity since you take as much as you need and it is sold by weight.

Plus, when you use the bulk bins, you are using less individually-packaged goods, which is better for the environment.

Sure, they often make you use their own plastic bags for sanitary reasons or whatever, but a thin layer of plastic is still better than the packaging you get with a lot of on-the-shelf grocery store items.

I know I have mentioned this before and it will probably seem like I’m a broken record at this point. But that’s only because it is totally true: meat is expensive, and you are paying a premium to keep it in your diet.

That said, I left this as the last item on the list because I know very few of you crazy carnivores will consider it as a serious option.

Still, it will not only make your meals cheaper, but it will also make them simpler (see #2 above); plus, meat spoils, so you have to deal with yet another perishable item.

Even if you choose to ignore this option, let’s at least agree to have plenty of veggies in our diet, k? Not to sound like your mom or anything, but it’s important whether you eat meat or not.

Get it? Like sandwich wrap? Yeah, I’m the worst. In any case, it’s totally possible to cook for one – and still save money.

What are your favorite ways to cook for one? Have a great way to do so while still saving money? Let us know in the comments.